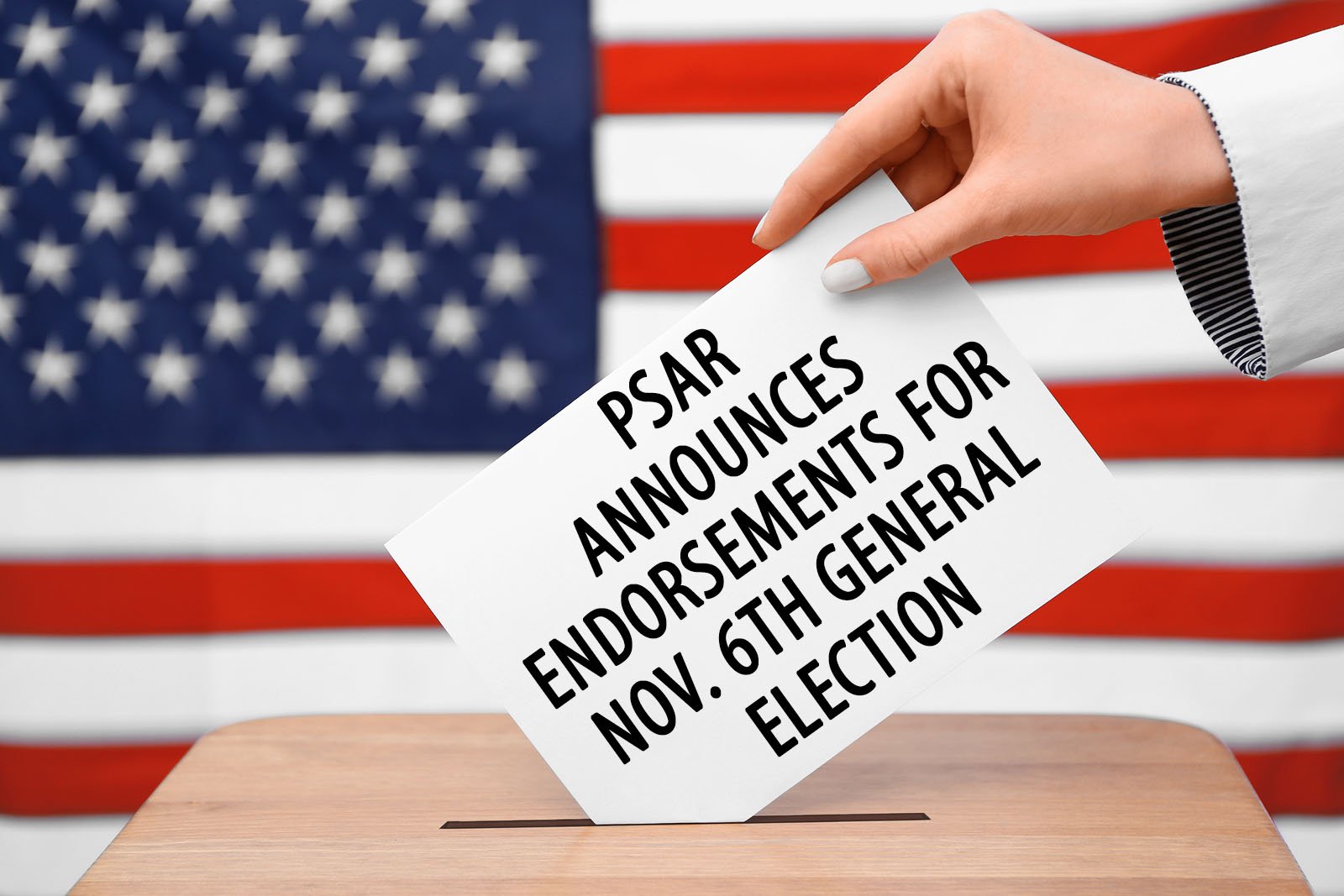 The Pacific Southwest Association of REALTORS® (PSAR) has announced its endorsement of candidates for the Nov. 6th general election. Endorsed candidates include:

In addition, PSAR is recommending the following:

PSAR believes rent control reduces the quality and quantity of housing. Typically, rent control leads to reducing available rentals and landlords skimping on repairs. Rent control eliminates incentives for landlords and property owners to fix up, or invest in, their units, as well as discourages new housing construction and decreases the number of available rental units. Vote “No” on “W.”
PSAR believes this measure would create new homeownership opportunities by generating more sales of single-family homes in existing neighborhoods. This will benefit young families at a time when California faces a severe shortage of homes for sale. Prop. 5 is actually a smart idea that will both give older people more flexibility with their lives and introduce liquidity to a housing market that could badly use it. The revenue it would cost local government is relatively small. Also, Prop. 5 is a common sense way to expand the benefits of Proposition 13 protections while providing more affordable housing.

Prop. 5 was initiated by the California Association of REALTORS® (C.A.R.). C.A.R. qualified the measure for the ballot after it submitted nearly 1 million voter signatures to the Secretary of State’s office, indicating strong voter support. Vote “Yes” on Prop. 5.


PSAR believes Prop. 10 is a flawed rent control initiative that would make housing more expensive, not less, and worsen the housing crisis. Vote “No” on Prop. 10.

In addition to positions on Prop. 5 and Prop. 10, C.A.R. is supporting Proposition 1, the Housing Programs and Veterans' Loans Bond. A “yes” vote on this measure would authorize the state to borrow up to $4 billion in general obligation bonds for housing-related programs benefiting veterans. If approved, additional affordable housing would be provided for veterans. The vast majority of the bonds, about $3 billion, would be set aside for various types of housing programs. The biggest share, or $1.5 billion, would go toward the construction and rehabilitation of permanent and transitional rental housing and apartments for California households who earn of up to 60 percent of the area median income. The second biggest portion of the $3 billion, about $150 million, would be earmarked for cities, counties, transit agencies, and developers to build higher density housing near transit stations. The remaining $1 billion would be earmarked for veterans participating in a home loan program. In addition to C.A.R., Prop. 1 has support from major California newspapers, including the San Francisco Chronicle, Los Angeles Times, and Sacramento Bee, as well as the League of Women Voters and Democratic state lawmakers.

The Pacific Southwest Association of REALTORS® (PSAR), a 2,600-member trade group for San Diego-area REALTORS®, offers educational training, advocacy and other services and resources to its REALTOR® members. Founded in 1928, PSAR has played a significant role in shaping the history, growth and development of greater San Diego County. The Association maintains a leadership role in the industry, empowering REALTORS® by leveraging our collective strength so they may serve homebuyers and sellers and the greater community. For more information, visit www.PSAR.org.