Heated market and a shortage of homes for sale continue upward

The California housing market reached a milestone in April that the San Diego market already has experienced.

The state’s median home price for an existing, single-family detached home exceeded the $800,000 benchmark for the first time ever in April 2021, according to the monthly home sales and price report from the California Association of REALTORS® (C.A.R.). The median price represents the point at which half of homes sell above a price, and the other half below it.

Heated market conditions and a shortage of homes for sale continued to put upward pressure on home prices in the state in April, driving California’s median price to $813,980, almost as high as San Diego’s April monthly figure of $825,120.

The year-over-year price gain was the highest ever recorded, and it was the first time since June 2013 that the state recorded an annual increase of more than 30 percent.

Home sales in the state increased on a monthly basis for the third consecutive month, rising 2.6 percent to 458,170 homes from 446,410 homes in March 2021 and up 65.1 percent from April 2020, when 277,440 homes were sold on a seasonally adjusted annualized basis. The statewide annualized sales figure represents what would be the total number of homes sold during 2021 if sales maintained the April pace throughout the year.

The sharp sales jump in April 2021 was expected following last year’s pandemic shutdown when home sales dropped more than 30 percent from the previous April.  Year-to-date statewide home sales were up 26.2 percent in April 2021.

“California continues to experience one of the hottest housing markets as homes sell at the fastest pace ever, with the share of homes sold above asking price, the price per square foot and the sales-to-list price all at record highs, while active listings remain at historic lows,” said C.A.R. President Dave Walsh, vice president and manager of the Compass San Jose office. “The high demand and shortage of homes for sale, driven by these market factors, continued to drive up home prices and shatter the record-high set just last month.”

“Not only do skyrocketing home prices threaten already-low homeownership levels and make it harder for those who don’t already have a home to purchase one, it also brings to question the sustainability of this market cycle,” said C.A.R. Vice President and Chief Economist Jordan Levine. “As vaccination rates increase and the state reopens fully, higher home prices will hopefully entice prospective sellers who have held off putting their homes on the market during the pandemic to feel more comfortable listing their homes for sale, which would alleviate pressure on home prices.”

-- Home sales in April from a regional perspective saw sharp gains with each region growing more than 38 percent from last year. The San Francisco Bay Area had the highest year-over-year increase of 101.4 percent, with five of its nine counties growing by triple digits from a year ago. The Central Coast came in second with an increase of 81.7 percent, followed by Southern California (65.5 percent), the Central Valley (39.8 percent), and the Far North (38.8 percent).

-- All but two of the counties tracked by CAR, 49 of 51, recorded a year-over-year sales increase in April, with 31 counties increasing more than 50 percent from a year ago, and 11 counties growing by triple digits. Six of the counties with an annual growth rate of more than 100 percent had a median price above $1 million in April 2021. Counties with an increase from last year had an average gain of 70.7 percent in April 2021, compared to 32.9 percent in March.

-- Sales growth in California in April 2021 remained concentrated in higher-priced markets, while home sales in the lower-end continued a lackluster performance. The million-dollar segment in April increased in demand by more than 200 percent in year-over-year comparisons, with sales of homes priced $2 million and higher surging more than 300 percent from a year ago. Meanwhile, sales of properties priced below $300,000 continued to fall precipitously, with the year-over-year growth rate dropping 34 percent in April 2021, compared to April 2020. Tight housing supply continues to be the primary constraining factor for fewer sales in the lower-price category.

-- New record median prices were set in all major regions in April 2021, with each region growing more than 20 percent from April 2020. The Central Coast region continued to have the highest year-over-year gain of 40.8 percent, followed by the San Francisco Bay Area (35.6 percent), Southern California (28.6 percent), the Central Valley (25.5 percent) and the Far North (22.8 percent).

-- Active listings in California fell more than 50 percent in April 2021 from April 2020, marking four straight months when the housing supply was cut in half from the same month a year ago.. The ongoing decline in inventory is due to the surge in demand over the past 10 months, as well as a lack of new listings. While new active listings in April 2021 experienced robust year-over-year growth compared to April 2020, when the government-imposed pandemic shutdown was underway, the level of newly added supply is still significantly below pre-pandemic levels. On a month-to-month basis, for-sale properties inched up by 7.4 percent in April 2021, compared to March 2021, and should climb further in the coming months if the market follows its typical seasonal pattern.

-- Statewide, the unsold inventory of available homes for sale dropped to 1.6 months in April 2021 from 1.7 months in March 2021 and was down sharply from April 2020, when there was 3.4 months of housing inventory. Inventory levels measured in months indicate the number it would take for the available supply of homes on the market to sell-out given the current rate of sales. 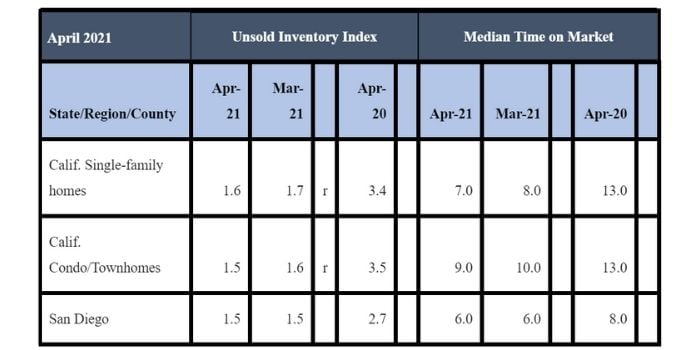 -- In San Diego County, the median number of days an existing, single-family home remained unsold on the market was six days in April 2021, which was the same number in March 2021. That number compares to seven days in both February 2021 and January 2021, as well as eight days in December 2020 and seven days in November, October and September 2020. The timeframe a year ago in April 2020 was eight days.