Fierce competition in the California housing market in March drove the state’s median home price to a new record high while sales remained solid heading into the spring homebuying season, according to the monthly home sales and price report from the California Association of REALTORS® (C.A.R.).

The statewide median home price in March reached a new all-time high of $758,990.

Similarly, the median home price in San Diego in March rose to a new record of $800,000.

In addition, nearly two-thirds or 63 percent of homes sold above the asking price in March 2021, reflecting the combination of intense demand and short supply. California already had set a record for share of home selling over listing price at 56 percent in February 2021.

Closed escrow sales of existing, single-family detached homes in California totaled a seasonally adjusted annualized rate of 446,410 in March 2021, down 3.5 percent from 462,720 in February 2021 but were up 19.7 percent from March 2020, when 373,070 homes were sold. The annualized sales figure represents what would be the total number of homes sold during 2021 if sales maintained the March pace throughout the year.

The monthly sales decline was the third in a row, and the sales pace was the lowest since last July. The nearly 20 percent sales gain was attributed to weak home sales a year ago as the coronavirus outbreak abruptly halted the real estate market and economy, CAR said.

The year-over-year statewide gain, from March 2020 to March 2021, was the highest since October 2013 and it was the eighth straight month that California’s median price registered a double-digit gain.

The median price represents the point at which half of homes sell above a price, and the other half below it.

“While intense homebuying interest is the engine that continues to drive housing demand, a shortage of homes for sales is the rocket fuel pushing prices higher across the state. A lack of homes for sale is creating unprecedented market competition, leading to a record share of homes selling above asking price in March,” said C.A.R. President Dave Walsh, vice president and manager of the Compass San Jose office. “With more of the state’s COVID-19 restrictions being lifted in the coming months as we move into the spring home buying season, we should see home sales improve as more prospective home sellers feel comfortable listing their homes for sale.”

“The market sentiment is drastically different today compared to a year ago at the onset of the pandemic,” said C.A.R. Vice President and Chief Economist Jordan Levine. “With the U.S. economy positioned to grow at the fastest pace since the early 1980s and mortgage rates trending down again in the past week, consumer confidence will improve further, so in the coming months, we should continue to see a solid bounce-back from last year as the market maintains its momentum.”

-- Home sales in March from a regional perspective experienced a double-digit sales surge compared to a year ago. The San Francisco Bay Area had the highest year-over-year gain, at a growth rate of 35.0 percent from March 2020. The Central Coast (31.8 percent), Far North (26.1 percent), and Southern California regions (23.3 percent) experienced a sales increase of more than 20 percent from last year.

-- Home sales in resort markets remained robust in March, with Big Bear, Lake Arrowhead and South Lake Tahoe all increasing more than 50 percent from a year ago. South Lake Tahoe was particularly strong in March 2021 with sales rising 128.1 percent compared to March 2020. Lake Arrowhead also had a strong month of March with sales growing near triple-digits year-over-year, while Big Bear increased by 54.8 percent and Mammoth Lakes jumped by 16.7 percent. 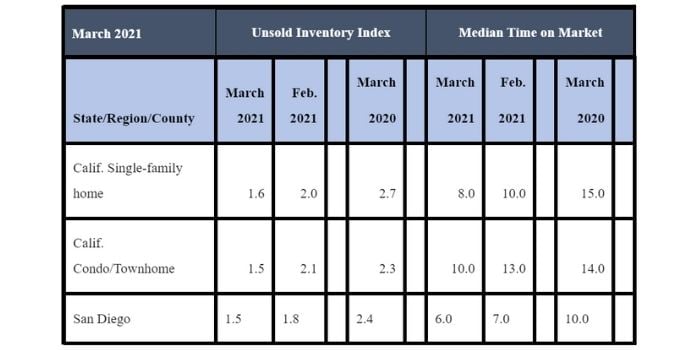 -- All 51 counties tracked by C.A.R. reported a gain in median price on a year-over-year basis, with 45 of them increasing more than 10 percent.

-- Active listings statewide fell 51.1 percent in a comparison between March 2021 and March 2020. It was the third consecutive month that listings declined more than 50 percent. On a month-to-month basis, for-sale properties inched up by 5.3 percent in March.

-- The available supply of homes for sale continued to tighten up across the state, with all major regions near record low levels. Forty-nine of the 51 counties covered by C.A.R. recorded a decline in active listings on a year-over-year basis in March, and 30 of them dropped more than half from levels a year ago.

-- Statewide, the unsold inventory of available homes for sale dropped to 1.6 months in March from 2.0 months in February and was down sharply from a year ago, when there was 2.7 months of housing inventory. Inventory levels measured in months indicate the number it would take for the available supply of homes on the market to sell-out given the current rate of sales.

-- In San Diego County, the median number of days an existing, single-family home remained unsold on the market was six days in March 2021. That number compares to seven days in both February 2021 and January 2021, as well as eight days in December 2020 and seven days in November, October and September 2020. The timeframe a year ago in March 2020 was 10 days.