According to its monthly home sales and price report released this week by the California Association of REALTORS® (C.A.R.), the state’s housing market has recently encountered some speed-bumps due to rising mortgage interest rates.

It was the eighth straight month for year-over-year gain in home sales. However, February’s nearly 10 percent home sales increase from a year ago was the smallest gain in the past seven months. Year-to-date statewide home sales were up 15.9 percent in February.

The statewide annualized sales figure represents what would be the total number of homes sold during 2021 if sales maintained the February pace throughout the year. It is adjusted to account for seasonal factors that typically influence home sales.

The double-digit statewide increase from last year was the seventh in a row and the second largest since February 2014.

The median price represents the point at which half of homes sell above a price, and the other half below it.

“The housing market has been cruising at a robust pace since the second half of 2020 but has encountered some speed-bumps recently as rates began to rise,” said C.A.R. President Dave Walsh, vice president and manager of the Compass San Jose office. “While higher rates may slow growth in home sales temporarily, the major roadblock in the long run is a shortage of homes for sale. With inventory dropping more than a half from a year ago, the market will soften in the second half of 2021 if we don’t see enough homes come on the market to meet demand.”

“The upward movement in rates has called into question whether the market will sustain its momentum going into the spring homebuying season,” said C.A.R. Vice President and Chief Economist Jordan Levine. “While rates are off their record lows, they are still relatively low by historical standards. Recent increases in mortgage rates will likely slow the pace of price growth in the coming months but will also motivate those who truly want to buy to enter the market before rates start moving further up.”

-- Home sales from a regional perspective surged in February, compared to a year ago. The Central Coast region posted the highest year-over-year sales gain, with a growth rate of 22.4 percent. The Far North (17.3 percent), the San Francisco Bay Area (16.1 percent), and Southern California (10.5 percent) regions also experienced double-digit year-over-year increases in sales from a year ago.

-- Resort marks continued to perform well in February. Sales growth in the resort markets was relatively strong when compared to the rest of California. South Lake Tahoe (56.7 percent), Lake Arrowhead (44.1 percent), and Big Bear (36.1 percent) all experienced sales increases of more than 35 percent from a year ago. The exception was Mammoth Lakes were sales were flat in February 2021. However, aggregated sales for the first two months of 2021 in mountain resort communities are up 40 percent from the same period last year.

-- All major regions recorded double-digit increases in the median price increased from last year with the San Francisco Bay Area growing the strongest at 26.5 percent. The year-over-year increase in the Bay Area’s median price was the largest since September 2013, and it helped to set a new record high in the median price for the Bay Area. The Central Valley region had the second highest price growth rate of all regions with its median price increasing 19.1 percent year-over-year in February, followed by Southern California (16.4 percent), the Central Coast (15.9 percent) and the Far North (11.7 percent).

-- Active listings statewide fell 52.5 percent in February 2021, compared to February 2021. It was a decline of more than 40 percent on a year-over-year basis for the eighth consecutive month. On a month-to-month basis, for-sale properties inched up slightly by 0.4 percent in February 2021 and should climb further in the coming months as the market prepares for the spring homebuying season and the pandemic situation continues to improve. 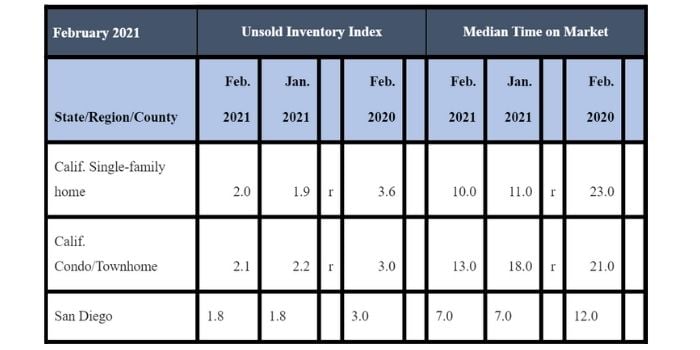 -- In San Diego County, the median number of days an existing, single-family home remained unsold on the market was seven days in February 2021, which was the same figure for January 2021. That compares to eight days in December 2020, seven days in November, October and September 2020. The timeframe a year ago in February 2021 was 12 days.