California’s housing market remained red hot in November 2020 with statewide home sales reaching the highest level in 15 years. Record-low mortgage rates and flexibility to work from home has driven home-buying interest to levels not seen since the last decade, according to the California Association of REALTORS® (C.A.R.).

Closed escrow sales of existing, single-family detached homes in California totaled a seasonally adjusted annualized rate of 508,820 for November 2020. It was an increase of 5 percent from 484,510 homes in October, and 26.3 percent higher from November 2019, when 402,880 homes were sold.

The year-over-year, double-digit home sales gain recorded in November was the fourth consecutive month and the largest increase over a year’s time since May 2009.

However, home prices continued to gain on a year-over-year basis with the statewide median price surging 18.5 percent from $589,770 recorded in November 2019. The double-digit increase from 2019 was the fourth month in a row and the highest 12-month gain since February 2014. The gain was also higher than the six-month average of 9.7 percent observed between May 2020 and October 2020.

“Home-buying interest is at levels that we have not seen for years, setting the stage for a stronger-than-expected comeback that fully recovered all the sales that the market lost in the first half of the year due to the pandemic,” said 2021 C.A.R. President Dave Walsh, vice president and manager of the Compass San Jose office. “Housing supply remains an issue, however, as we will likely to see a shortage of homes for sale in the near term, which will put upward pressure on prices and dampen affordability for those who haven’t been able to take advantage of low rates.”

“California’s housing market continues to be the bright spot in the economy, but the direction and pace of the recovery will hinge on the coronavirus pandemic and the distribution of the vaccine in the coming months,” said C.A.R. Senior Vice President and Chief Economist Leslie Appleton-Young. “The rise in COVID-19 cases and tighter constraints on economic activity recently imposed will likely have implications for the housing market as renters and homeowners face adverse impacts to their incomes, which is why Congress should pass additional relief for renters, homeowners, and workers as soon as possible.”

Even with low inventory levels, the coronavirus pandemic has increased the demand for spacious, multi-functional homes as more homeowner families are dealing with homebound distance learning for school and working remotely for the job.

-- Home sales from a regional perspective continued to increase in November 2020 by double-digits in year-over-year comparisons for most California regions. The San Francisco Bay Area had the highest gain of 34.4 percent over last year, followed by the Central Coast (33.4 percent), Southern California (19.1 percent) and the Central Valley (18.3 percent).

-- With a resurgence in Covid-19 cases in recent weeks and the market entering the traditional holiday season, active listings declined from the prior month as expected, contributing to a substantial decline in inventory. Active listings fell 46.6 percent from last year and continued to drop more than 40 percent on a year-over-year basis for the sixth straight month.

-- The unsold inventory of available homes for sale fell sharply from 3.1 months in November 2019 to 1.9 months in November 2020. Statewide inventory in October 2020 was 2.0 months. Inventory levels measured in months refers to the number it would take for the current supply of available homes on the market to sell-out given the current rate of sales. 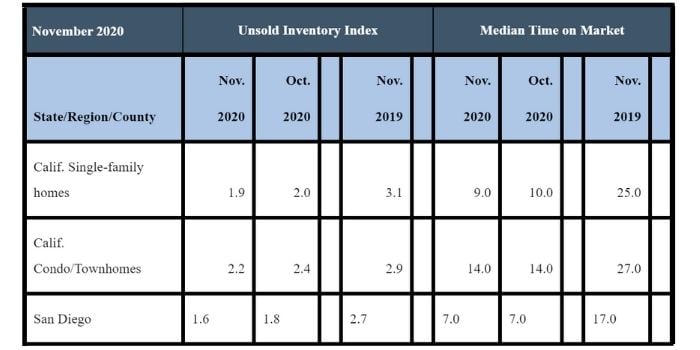 -- The average rate for a 30-year, fixed-rate mortgage continued to plummet, dropping to 2.67 percent in the second week of December. It was the lowest rate since Freddie Mac began tracking the data in 1971. A year ago at this time, it averaged 3.73 percent.

-- Mortgage applications increased 1.1 percent for the week ending Dec. 11, according to the Mortgage Bankers Association’s week-over-week comparison report. Refinance applications also increased 1 percent during the same week and 105 percent in a year-over-year comparison.

-- CoreLogic said San Diego County median home price in November remained unchanged from October and September at $650,000, which is 9.3 percent higher than a year ago. It was the second consecutive time for no monthly price increase since May. The price represents all homes, including single-family, condos and townhomes.

-- A group of top real estate economists speaking at a forecast forum hosted by the National Association of Real Estate Editors recently predicted that home prices will continue to rise in 2021 fueled by low mortgage interest rates and lack of homes for sale.

-- Californians are pessimistic about their economic future with 73 percent of survey respondents in San Diego and Orange counties anticipating bad financial times during the next 12 months, according to a report released in early December by the Public Policy Institute of California. The survey of 2,325 Californians conducted after the November election showed the statewide average of pessimism at 68 percent.

-- Realtor.com is predicting prices for existing single-family homes will continue to climb in 2021, making affordability a continued problem. San Diego is projected for an 11.3 percent year-over-year increase in existing home sales and a 5.5 percent rise in home prices. Realtor.com also expects mortgage rates to climb from 3 percent at the beginning of 2021 to 3.4 percent by year’s end. Realtor.com admits there are numerous wildcards that could shake up the housing market, including what happens with Covid-19 vaccines or more government-imposed shutdowns.

-- Rental applications in San Diego County were lower by about 7 percent for the third quarter in a year-over-year comparison as many grown children moved back in with their parents, or doubled up in apartments to make their dollars go further, according to the data firm Rent Café. The report said in 18 of the 30 largest U.S. cities, including San Diego, more renters left than moved into rental properties. The firm also said apartment rents decreased in 2020 in the nation’s top 10 most expensive cities.