Fall is the new spring for the California’s housing market as record-low mortgage rates, skyrocketing buyer demand and shrinking inventory are making this fall season resemble a typical, active springtime for homebuyers and sellers. In October 2020, home sales and prices recorded double-digit increases compared to a year ago, according to the most recently monthly report from the California Association of REALTORS® (C.A.R.).

The coronavirus pandemic has heightened the desire for more spacious, multi-functional homes as more people have been forced to homebound distance learning for school and working remotely for the job.

Normally, the housing market experiences a cool-down in the fall as students return to school. However, timelines that normally revolve around the start of the school year are no longer applicable. That dynamic has changed with Covid delaying the reopening of schools for in-person learning.

As a result, sellers are continuing to receive top dollar for their homes outside the prime selling season. Homes are selling quickly and buyer demand shows no signs of tapering off anytime soon.

“California’s housing market continues to exceed expectations as this year’s traditional homebuying season has shifted into late summer and fall instead of spring and early summer,”  said 2021 C.A.R. President Dave Walsh, vice president and manager of the Compass San Jose office. “The market is unseasonably strong, as motivated buyers continue to take advantage of the lowest interest rates in history. The ongoing momentum will keep home sales elevated for the next couple of months, and the housing market will remain a rare bright spot in a struggling economy.”

“An extremely favorable lending environment and a renewed attitude towards homeownership is prolonging the homebuying season and extending the market’s V-shaped recovery to the off season,” said C.A.R. Senior Vice President and Chief Economist Leslie Appleton-Young. “The question that remains to be answered, however, is whether the strong market is sustainable in the longer term as market fundamentals continue to be tested by tight supply, eroding housing affordability, and most of all, the rising number of Coronavirus cases.”

Other key points from the October 2020 resale housing report included:

-- At the regional level, sales increased in October 2020 in all major regions compared to last year with growth rates of more than 10 percent, except in the Central Valley, which grew by 9.9 percent from a year ago.

-- Sales in resort communities remained robust in October 2020. Housing demand in Big Bear, including Big Bear City and Big Bear Lake, continued to surge with sales growing 125.6 percent from last October. Lake Arrowhead and South Lake Tahoe both recorded strong sales in October, with year-over-year growth rates of 47.7 percent and 29.1 percent, respectively. Sales in Mammoth Lakes also jumped in the latest month with a gain of 55.6 percent from last October.

-- At the regional level, all major regions posted double-digit, year-over-year median price increases. The Central Coast led the pack again with an increase of 25.9 percent, as high-end home sales in Santa Barbara and Monterey continued to surge. The San Francisco Bay Area had the second largest price increase of 17 percent, followed by Southern California (15.4 percent), the Central Valley (14.7 percent), and the Far North (12.8 percent).

-- With active listings dipping slightly from the prior month, while the momentum of sales continued to push forward into the traditionally off-season months, the Unsold Inventory Index (UII) in October was unchanged from September, when it reached the lowest level in nearly 16 years. The UII fell sharply from 3.0 months in October 2019 to 2.0 months this October.

-- The unsold inventory of available homes for sale in October 2020 in California remained unchanged at 2.0 months, compared to September 2020, when it reached the lowest level in nearly 16 years since November 2004. Statewide inventory in October 2019 was 3.0 months.

-- Active listings continued to decline significantly in October 2020, with most regions declining more than 40 percent from last year. The Central Valley had the biggest year-over-year drop of 49.6 percent in October, followed by Southern California (-46.6 percent), the Central Coast (-46.5 percent), the Far North (-40.9 percent), and the San Francisco Bay Area (-23.8 percent). 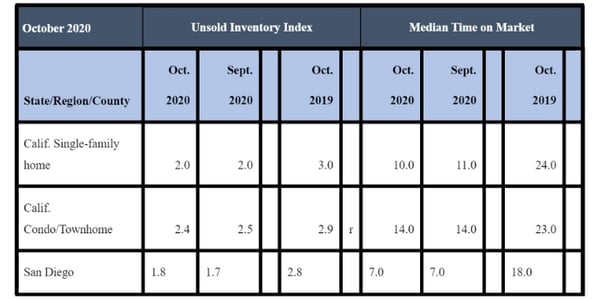 -- CoreLogic said San Diego County median home price in October remained unchanged from September at $650,000, which is 13 percent higher than a year ago. It was the first time for no monthly price increase since May. The price represents all homes, including single-family, condos and townhomes.

-- San Diegans searching for out-of-state homes for sale on Redfin are most frequently looking at lower-cost cities Phoenix and Las Vegas, along with areas in Riverside County. The homebuying website said 24.3 percent of searches originating from metropolitan San Diego in the 2020 third quarter included out-of-town communities, compared to 18.8 percent the same time last year. The most active metro area people were looking to leave was New York City at 35.8 percent.

-- Redfin also reports that San Diego had the second highest number of multiple offers on homes for sale in the U.S. in October, with 73.2 percent of Redfin homes in a bidding war, second only to Salt Lake City’s 75 percent. Nationwide, 56.8 percent of Redfin offers on home faced competition from at least two prospective buyers.

-- Zillow says homes are remaining unsold on the market for 12 days, which is 17 days less than last year. Also, sales listings in San Diego County are about 34 percent lower than a year ago.

-- The percentage of would-by homebuyers who could afford to purchase the $729,000 median-priced, existing single-family home in the 2020 third quarter in San Diego County was at 27 percent, compared to 30 percent in the 2020 2Q and 29 percent in the 2019 3Q, according to housing affordability index (HAI) statistics from the California Association of REALTORS®. Statewide, the HAI percentage of all California households that could afford to purchase the $693,680 median-priced, single-family home in 2020 3Q was 28 percent, which was the lowest in nearly two years.

-- Every metro area tracked by the National Association of REALTORS® (NAR) experienced annual home price increases in the 2020 third quarter, which was attributed in large part to record-low mortgage rates and depleted nationwide housing inventory. NAR said eight of America’s 10 most expensive metro areas were located in the West, led by San Jose ($1.4 million for a median-priced, single-family home), San Francisco ($1.125 million) and Anaheim, ($910,000). San Diego had the fifth highest median price for a single-family home in the U.S. at $729,000, according to NAR.