We all know that 2020 was a unique and daunting year, led by the world-wide pandemic that touched people and businesses in a myriad of ways. Society as well experienced various forms of upheaval whose impacts are yet to be determined.

The real estate industry was not immune to the influences of 2020, facing its own set of challenges. Fortunately for the membership of PSAR, it was Robert Cromer’s year to serve as PSAR President.

Throughout 2020, Robert maintained a steady hand at the wheel as leader of our association. He brought a measured tone, demonstrated authenticity and inspired teamwork among the PSAR Board of Directors. 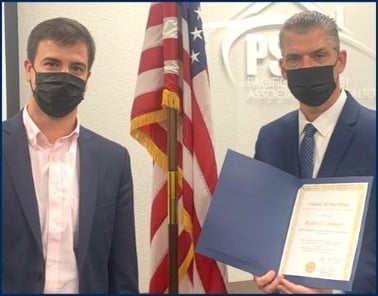 Recently, several elected officials have recognized Robert for his outstanding leadership and resilient make up while leading PSAR as board President.

Robert has also drawn noteworthy praise for his recent comment posted on a National Real Estate Masterminds Facebook page. His response to a question about the value of association participation was inciteful and he used great metaphors to help make his point.

In his own words, Robert said the following:

I was on a National Real Estate Masterminds page and someone posted today. “What is the big difference between being a Real Estate Agent and a REALTOR®?” You can imagine some of the negative responses. One person wrote “$800.” Others said “REALTORS® subscribe to a code of ethics.”

Here was my answer: Not being a Realtor is like showing up to a beautifully hosted party at a home without bringing the host a bottle of wine or side dish. Then you eat several plates of food, drink beverages and enjoy everyone’s company without contributing. A person can do that, but it kind of sucks for the host and those who contributed (provided food, cleaned the home before, set up tables, hired the caterer, broke everything down, took the trash out, cleaned up after you, etc.).

NAR and CAR (California) spend millions of dollars fighting for personal property rights and home-ownership, lobbying against laws that would restrict one of the greatest ways to provide security for millions of families and change one’s socioeconomic status-- being a home owner. They have been doing this for many years, before any of us were REALTORS® and when we were just kids.

Now take it one step further and imagine them as your parents, who have always looked after you and your friends. In states that were shut down, they lobbied Congress to make us essential workers, so we could feed our children and so the states’ economies did not fold like bad poker hands. They also made sure we were included in the stimulus package and PPP loans. There are thousands of more examples that smarter people than I on this page can add. Don’t show up to the party without being a contributor. You wouldn’t do that to your parents, would you?

I have devoted the past fifteen years of my life advocating for Realtors. I join hundreds of volunteers in saying this post was inspirational. It moves a lot of people who are involved with, and give so much to, this industry.

Robert is referring to those who are not REALTORS®. His perspective also applies to those REALTORS® who volunteer versus those who don’t; to those who contribute to the PACs and HAF and those who don’t.  It is critical that individuals look at the history and understand the issues before jumping to conclusions. Just two years ago AB-5 passed requiring that most Californians become employees. The fact that Realtors are not employees right now did not happen by chance. There is a massive organization in place to protect not only homeownership but also the interests of those who facilitate it. There are a few REALTORS® doing so much to help all REALTORS® It’s important to honor and recognize their selfless efforts.

Robert’s words as a REALTOR® are meaningful. I wish more of our leaders would step up and articulate these same ideals.

Some of those officials are preparing a proclamation containing these tributes to Robert:

WHEREAS, Robert Cromer served as 2020 President of the Pacific Southwest Association of Realtors (PSAR), one of the largest real estate trade organizations for San Diego-area REALTORS®;

WHEREAS, Robert provided outstanding leadership and vision during a surreal year of setbacks and hardships when a brutal pandemic swept the globe as the shadow of COVID-19 enveloped the land;

WHEREAS, PSAR thrived and grew its membership during an unparalleled, difficult and challenging year, thanks to Robert’s demonstration of strong leadership and clear communication that relieved anxiety and encouraged strength and resiliency among PSAR members;

WHEREAS, Robert embodied PSAR’s mission to empower REALTORS®, to protect private property rights and create homeownership opportunities for all, while adhering to the highest standards of integrity and the REALTOR® Code of Ethics;

WHEREAS, Robert’s example of leadership and decision making in uncertain times, plus his blend of competence, firmness, calmness and empathy in a crisis, empowered PSAR members to flourish by leveraging a collective strength in service to homebuyers and sellers throughout the greater San Diego County community;

THEREFORE, we hereby join the 3,500 PSAR real estate professionals in thanking Robert Cromer for his tremendous volunteer service and offering our best wishes for a successful real estate career in the future as a past PSAR President. Good luck and best wishes.

~Thanks, Robert Cromer, for your service to PSAR. We’re all very grateful.