California’s housing market outperformed expectations in September 2020 with home sales at their highest level in more than a decade and the median home price at another record high for the fourth straight month.

Closed escrow sales of existing, single-family detached homes in California approached the 500,000 level in September, making the Covid-19 pandemic that depressed California’s housing market earlier this year seem like a distant memory, although year-to-date homes sales were down 3.7 percent in September.

To complement high home sales figures, the statewide median home price hit another new high in September 2020, after setting records in June, July and August. California’s median home price exceeded the $700,000 mark for the second consecutive month, as it reached $712,430 in September 2020, edging up 0.8 percent from $706,900 in August 2020, and jumping 17.6 percent from $605,680 in September 2019. The yearly price increase was the highest recorded since February 2014 and higher than the six-month average of 5.3 percent observed between March 2020 and August 2020.

Home sales in all price segments are continuing to bounce back since the Covid-19 crisis depressed the housing market earlier this year while sales of higher-priced properties are recovering faster than the rest of the market.

Analysts say factors causing price increases include a lack of homes for sale leading to price wars, plus record low interest rates and workers stuck doing jobs from home are raising homeownership levels and some are looking for more square footage space.

“As motivated buyers continue to take advantage of the lowest interest rates in history, home sales will be elevated in the next couple of months, and the housing market should remain a bright spot in a broader economy that continues to struggle,” said C.A.R. President Jeanne Radsick, a second-generation REALTOR® from Bakersfield, Calif. “And with many employers allowing the flexibility of working remotely, homebuyers now also have the option of searching in less expensive areas where homes are more affordable and buyers can get more home for their money.”

“With the statewide home price hitting new highs for the past four months, it’s sounding like a broken record as California home sales and prices continue to outperform expectations,” said C.A.R. Senior Vice President and Chief Economist Leslie Appleton-Young. “However, with the shortest time on market in recent memory, an alarmingly low supply of homes for sale, and the fastest price growth in six and a half years, the market’s short-term gain can also be its weakness in the longer term as the imbalance of supply and demand could lead to more housing shortages and deeper affordability issues.”

Other key points from the September 2020 resale housing report included:

-- At the regional level, homes sales increased in the high double-digits compared to last year in all major regions. The Central Coast and the San Francisco Bay Area had the strongest sales growth in September with both regions surging 42 percent and 34.2 percent, respectively. That was followed by increases in the Far North (28.3 percent, Southern California (25.0 percent and the Central Valley (18.4 percent).

-- At the regional level, home prices posted double-digit increases compared to last year in all major regions. The Central Coast had the highest increase in median price, rising 20.6 percent from last year, followed by the San Francisco Bay Area (20.5 percent, the Far North (19.0 percent, Southern California (15.2 percent) and the Central Valley (14.6 percent. All regions except the San Francisco Bay Area set a new high in median price in September.

-- Active listings in September 2020 continued to decline significantly in all major regions. The Central Coast had the biggest drop (-60.3 percent) from last September, followed by the Central Valley (-51.5 percent), Southern California (-49.9 percent), the Far North (-43.9 percent), and the San Francisco Bay Area (-31.9 percent).

-- Housing inventory tightened by double-digits in all price segments, but the constraint was more pronounced in the affordable markets. Active listings in every price range continued to decline sharply from last year, with for-sale properties priced below $1 million falling 56 percent on a year-over-year basis. Compared to a year ago, the supply for homes priced between $1 million and $3 million declined 30.4 percent, and homes priced at or above the $3 million benchmark declined 19.4 percent. 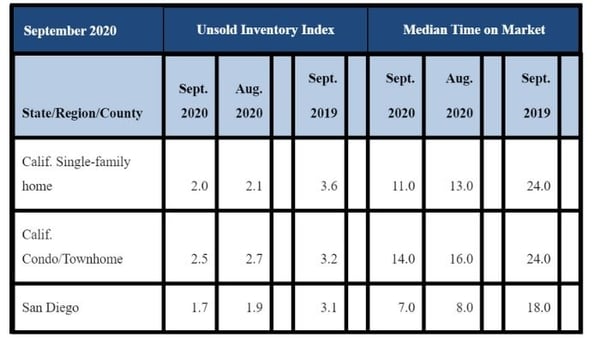 -- The Commerce Department reported the nation’s third-quarter domestic product (GNP), a measure of the total goods and services produced in the July-to-September 2020 period, expanded at a 33.1 percent annualized pace. That’s the fastest growth ever for the U.S. economy and it follows the worst quarter in history when the economy plunged 31.4 percent in the second quarter 2020. The previous GNP quarterly record of 16.7 percent was set following World War II in the first quarter of 1950.

-- Realtor.com said the housing market is bucking the traditional trend of a cool-down in the fall season, which typically occurs as students return to school. While buyers normally begin to hunker-down this time a year, instead sellers are getting top dollar for their home outside of the prime selling season, said Realtor.com.

-- A recent S&P CoreLogic Case-Shiller reports home prices in San Diego increased 7.6 percent over the past year, the third-fastest in the nation and at a rate not seen in more than two years. The other cities with faster increases were Phoenix, up 9.9 percent, and Seattle, up 8.5 percent.

-- Zillow reports the median price of a single-family home in September was $632,264, marking a 7.6 percent increase from a year ago. Nationally, the typical home value rose 5.8 percent in a year-over-year comparison to $259,906 in September.

-- A Redfin survey of more than 3,000 people in October revealed that 16 percent of them would consider moving to another country outside the U.S. if their preferred presidential candidate loses in November. That’s up from 9 percent four years ago. Redfin’s survey also found that 20 percent of Biden voters say they would leave the U.S. if he loses. Among Trump supporters, 15 percent said they’d depart if the President loses reelection. A greater percentage, 24 percent, said they are considering moving to another state. Redfin also reports landlords in multiple states are thinking about raising rents if Biden wins.