The California housing market’s home sales activity rebounded in September 2021, reversing a four-month decline. It was the state’s largest monthly increase in more than a year, according to the latest home sales and price report from the California Association of REALTORS® (C.A.R.).

Closed escrow sales of existing, single-family detached homes statewide on a seasonally adjusted annualized rate were up 5.6 percent to 438,190 in September 2021, compared to 414,860 in August 2021 and down 10.5 percent from a year ago in September 2020, when 489,590 homes were sold on an annualized basis. The statewide annualized sales figure, collected from more than 90 local REALTOR® associations and MLSs statewide, represents what would be the total number of homes sold during 2021 if sales maintained the August pace throughout the year. It is adjusted to account for seasonal factors that typically influence home sales.

The month-to-month increase from August to September 2021 was the largest since August 2020. In addition, statewide sales maintained a 16.8 percent increase on a year-to-date basis.

Meanwhile, California’s median home price declined to $808,890, down 2.3 percent from $827,940 in August, when a record price was set. The September price was 13.5 percent higher than the $712,430 recorded last September. The median price in California remained above the $800,000 benchmark for the sixth consecutive month but the double-digit, year-over-year price gain was the smallest in 14 months.

A change in the mix of sales, once again, played a role in the change in the statewide median price, as the sales share of million-dollar continued to shrink on a month-to-month basis, and prices in the high-end market increased at a slower pace than the low-end market over the past two months.

“As we move into the off-homebuying season, we should see market competition easing and home prices moderating, giving those who waited out the highly competitive market earlier this year an opportunity to revisit buying,” said C.A.R. President Dave Walsh. “Interest rates are expected to remain low and the availability of homes for sale should improve, which should boost homebuying interest and spur sales.”

“With the economic recovery remaining on course but progressing at a pace slower than anticipated, rates are expected to rise modestly in the next few months but will remain low,” said C.A.R. Vice President and Chief Economist Jordan Levine. “While statewide home sales are expected to dip slightly next year according to our latest forecast, housing demand will remain solid and post the second-highest level of sales in the past five years. The market will stay competitive in 2022 as the normalization continues, and home prices will remain elevated.”

Other key points from C.A.R.’s September 2021 resale housing report include:

-- Median prices in all major regions continued to grow on a year-over-year basis. The San Francisco Bay Area had the largest jump (21.7 percent) of all regions, followed by the Central Valley (15.4 percent), Southern California (15.0 percent), the Central Coast (5.8 percent), and the Far North (5.7 percent).

-- Home prices continued to exhibit strong growth from last year, with 44 out of 51 counties showing a year-over-year gain from 12 months ago, and 38 of them increased more than 10 percent from last September.

-- California’s housing supply leveled off in September as the market transitioned into the off-season. Orange County had a 46.3 decline in active listings. The dip in new active listings could be due to seasonality. 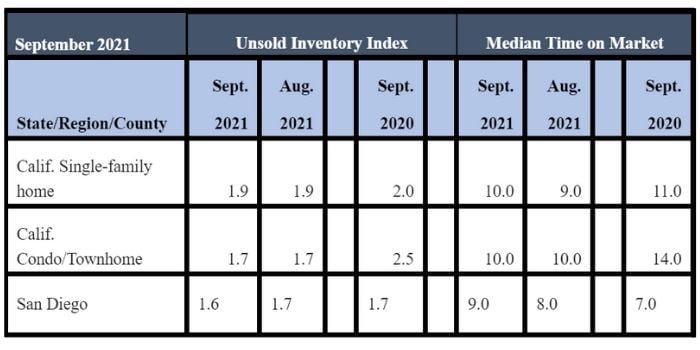 -- Statewide, the unsold inventory of available homes for sale was unchanged at 1.9 months for September, August, and July, and slightly below the September 2020 level of 2.0 months. Inventory levels measured in months indicate the number it would take for the available supply of homes on the market to sell out given the current rate of sales.

-- The median number of days it took to sell a California single-family home in September 2021 was 10 days, which compares to nine days in August 2021 and 11 days in September 2020. The 10-day figure compares to eight days in July and June and seven days in May and April. Before setting record low numbers this year, the previous statewide record was nine days in November 2020.