PSAR is recommending a “no” vote on California Proposition 15, a ballot measure that calls for higher property taxes on commercial and industrial real estate.

Proponents claim $6.5 billion to $11.5 billion generated from the increased property taxes would be allocated to schools (40 percent) and local government (60 percent).

Opponents say Prop. 15 is a direct attack on Proposition 13, which limits annual increases in assessed property value to 2 percent. Prop. 13, passed by California voters in 1978, remains a godsend to fixed-income retirees and middle-income workers who would be incapable of paying the increased property tax assessments over the last 40 years as California home prices have quintupled. If enacted, this massive tax increase will prompt companies to flee California at a time when businesses are already struggling.

The San Diego County Office of Assessor-Recorder-County Clerk, which opposes Prop. 15, recently delivered a presentation to PSAR members. The presentation included the contention that supporters for Prop. 15 are laboring under five false premises:

A Berkeley Research Group study found increasing property taxes on small businesses will hurt female- and minority-owned businesses the most, and up to 120,000 private-sector jobs will be lost. Prop. 15 would incentivize local governments to approve business projects to replace existing housing in order to generate greater property tax revenue.

Dan Walters, columnist with CalMatters, a public interest journalism venture, wrote: “Both proponents and opponents know that Proposition 15 is a proxy battle over whether Proposition 13 is still an untouchable icon. The measure’s backers had no way of knowing that the COVID-19 pandemic and the severe recession it spawned would visit themselves on California, changing the tenor of their battle with business groups over the issue. While proponents argue that the new revenue is needed to keep vital public services, including schools, from being slashed, opponents argue that with businesses already suffering, this is the wrong time to saddle them with more taxes.”

Antonio Villaraigosa, former Mayor of Los Angeles and Speaker of the California State Assembly, wrote in a CalMatters column: “This poorly drafted tax measure will disproportionately hurt everyday Californians during the worst economic crisis since the 1930s. It will put significant pressure on jobs in general, but private sector union jobs in particular. Because Prop. 15 raises property taxes, those higher taxes will get passed on to small business tenants, who rent. These businesses, in turn, will pass higher costs on to consumers in the form of increased prices on everything we buy, groceries, fuel, utilities, clothing and health care. California’s cost of living is already among the nation’s highest. Prop. 15 will drive the cost of living even higher.”

For more information about voting “no” on Prop. 15, visit https://noonprop15.org. The following statement is on the website: “Amid an unprecedented economic crisis, special interests are pushing Prop 15 on the November 2020 statewide ballot that will destroy Prop 13’s property tax protections and will be the largest property tax increase in California history. If businesses lose their Prop 13 protections, homeowners will be next.

“Prop 15 will raise taxes on business property, leading to higher rents for small businesses. Ultimately, Prop 15 will make income inequality worse by driving up the cost of living for just about everything we need and use, like food, utilities, daycare and healthcare.

“We must reject Prop 15 and maintain Prop 13 protections that have kept property taxes affordable and provided every taxpayer who buys a home, farm or business property with certainty that they can afford their property tax bills in the future. Now is not the time to raise taxes and bring more uncertainty to businesses and all Californians.”

County Assessor Comments on Prop 15 - "Unfortunately, Prop 15 hides that it is the largest property tax increase in California history that will"... Read More 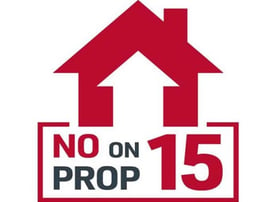 Our Mission is to empower Realtors to flourish while being accountable to each other
our clients and our community.